The Convergence of 5G & WiFi6: Key to Supporting “The New Normal” 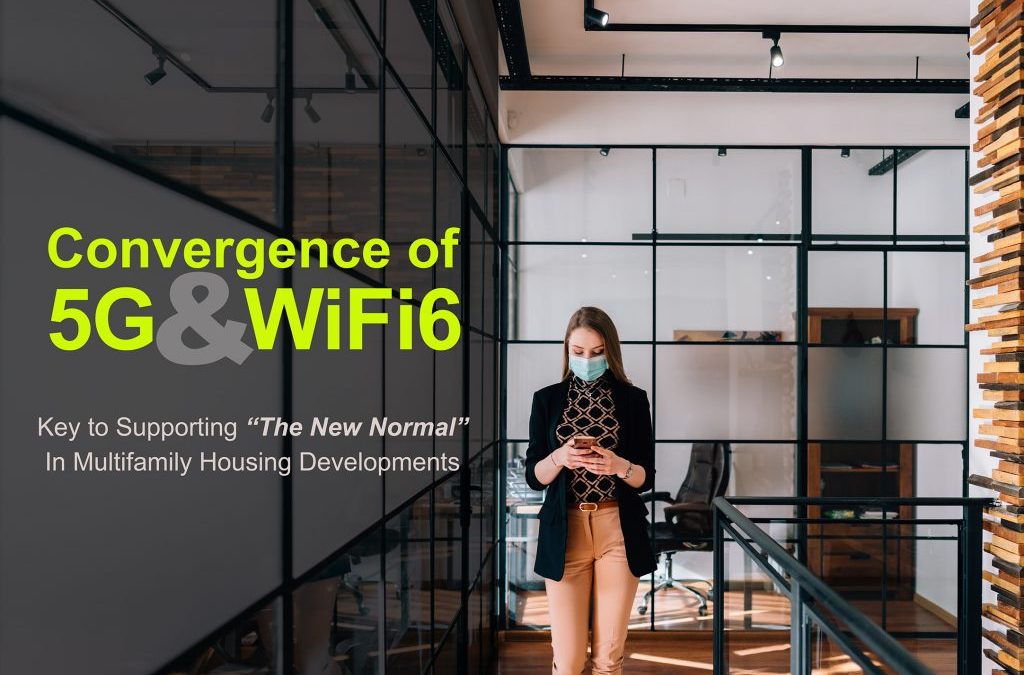 These last six months have taught us all the importance of connectivity. Almost overnight voice and data connectivity became among the most essential utilities in our lives. The key to our ability to work, attend school, seek medical advice and stay in touch with family and friends relied and continues to rely on our level of connectivity. This fact has been intensified in the multifamily housing industry, an industry that has been years plagued by network interference, poor in-inbuilding voice coverage and lack of ISP choice. The good news is that the convergence of two new technologies, WiFi6 and 5G will make it easier for building owners to provide residents with managed solutions for both coverage and capacity.

We are seeing the term “5G” being used everywhere, but first and foremost it is important to understand that seeing 5G does not necessarily mean that one is using 5G. While most cellular companies are talking up their 5G networks, mobile availability is limited but will continue to expand in 2021. While the deployment of the 5G networks have begun in some form across most carriers, the real implications of 5G will be seen in the coming years.

When compared to 4G, the improvements are huge. 5G will have 10x the speed of 4G with data rates of 10Gbps, less than half the latency (delay) and 200 times the device counts using all frequencies. 5G is geared towards IoT where faster response times are required (think driverless cars and remote surgery) – these are the applications where we will see more in the coming years. These improvements come with a few negatives. Coverage areas will be smaller and coverage distances will be shorter – this means more towers which means a slow roll out. There are also major security concerns with using 5G, especially when it comes to IoT applications. Probably the biggest issue for multifamily buildings, however, is that 5G will not penetrate buildings any better than 4G, in fact the penetration will be worse. This is because 5G will operate in higher frequency bands.

WiFi6 is considered “the in-building 5G”. For end user experience, WiFi6 will also provide faster speeds and lower latency. WiFi6 utililzes a new WiFi protocol – OFDMA, the same as 5G- which solves the WiFi interference issue in dense device environments. This new protocol combined with new features effectively offers 92 dedicated device connections at 14 Mbps from each access point, thus eliminating interference and congestion. Devices connected to WiFi6 will have much longer battery life due to the addition of a feature known as Target Wake Time.

In addition to the new protocol and feature sets, the FCC allocated an additional 1 Ghz of spectrum in the 6 Ghz band. This addition of spectrum has huge implications for multifamily buildings, it means that the amount of frequency spectrum available for WiFi in each building is ten times greater than the spectrum available to most cellular providers in one large city. End users in a building will have much greater speed and capacity.

There will be no in-building penetration issues for WiFi as there are with cellular, however where cellular penetration issues occur, WiFi can pick up the slack when deployed as a seamless, managed service in a building. Truly managed WiFi can provide building-wide voice coverage in a way that is seamless to the residents meaning they will not know if they are talking over WiFi or cellular.

As far as security is concerned, WiFi inherently has security issues, these can be greatly exacerbated in multifamily buildings where residents have to procure their own unmanaged wireless services. In a managed wireless network, a provider like Spot On Networks, has built-in, patented security technology so that residents and staff are protected from hacking, spoofing and identity theft.

The Convergence of WiFi6 & 5G – What It All Means for Multifamily

The most exciting part about the advancements that come with both 5G and WiFi6 is that, finally, these technologies are being built to work together. This convergence is happening across the board with the cellular developers, the WiFi developers and the device manufacturers. The goal is to be able to provide the end user with a seamless experience whether they are inside or outside. 5G and WiFi6 have been built to coexist and complement each other.

At the device level, Multipath TCP allows for a connected device to transmit data over multiple pathways at the same time (WiFi and Cellular). The device puts out its transmission and decides to use the network that has the strongest connection without the end user being aware. A user can move in and out of cellular or WiFi coverage with no lost connection. HotSpot 2.0, often referred to as WiFi Certified Passpoint, is another technology that will minimize disruption to the end user’s connection, however HotSpot 2.0 sits on the WiFi side. This technology is a wireless standard allowing for end users to travel from WiFi to cellular and WiFi to WiFi without having to reauthenticate and establish a new connection.

The relationship between WiFi6 and 5G is, and will continue to be, symbiotic with the goal of both to be seamless connectivity and roaming between networks.

Why Is This Important for Multifamily?

The most important thing to understand is that for buildings with penetration issues – 5G will not only continue to have issues, but penetration will be worse and residents will become more frustrated with lack of coverage in the building. The good news is this does not have to be a problem for the resident. When a truly managed WiFi network is put into a building, the resident will have property-wide voice and data coverage and the lack of cellular penetration will not matter. This solution is possible today with both 4G and WiFi5 and now that the industries are working together, the seamless transitions between cellular and WiFi will continue to improve.

The Multifamily industry is forecasting major impacts from COVID-19 to both apartment construction and leasing. Building owners will need to ensure that:

a) Residents have the best coverage and capacity they need in the “new normal” for work, school, doctors, communicating with loved ones, etc.

b) Building owners consider what their properties have to offer to residents as far as value added amenities. What are the amenities that are going to really count in the “new normal”? During the pandemic, properties that had invested millions into swanky resort-like amenities have suddenly found those amenities much less valuable.  Building owners that had invested in wireless voice and data connectivity, however, found their “amenities” suddenly a priceless utility.  In the coming months and years, amenities like smart appliances, keyless entry, keyless elevators, wireless HVAC and A/V equipment and other Smart Building/ Smart Apartment IoT will become major differentiators for residents.